When the truth just gets in the way of the way things should be....

The weeks are flashing past, I'm not getting out as much as I would like, but there isn't anything in Newtonhill to see anyway. I was down at the beach scoping a Purple Sandpiper among the 20 or so Ruddy Turnstones among the seaweed. A new person there, and the perplexing 'Are you Martin?' was followed by the trepidation-inducing 'I've read your blog' - as I started to wonder who I've libelled recently. So this was Thane (Hi Thane) and brings the number of current N/hill birders to 5 (five! - I always assumed the population of Newtonhill was me and a few rather scabby-looking crabs. Turns out it's full of birders).

2 Common Stonechats and a few Rock Pipits on the beach too, 12 Black-headed Gulls and a Common Gull feeding among the ferocious breakers, and with birds out at sea so I went up to the cliffs for a seawatch, for about half an hour before I gave in. Lots of Northern Fulmars about (well, about 50), mostly going south, and about 50 Common Gulls, feeding and mostly going north. Say what you like about Common Gulls, and I do, they're hard as nails. Also one adult Northern Gannet (they fo hang around just about all winter), but apart from that and a few Razorbills and Guillemots, there's not a lot to be seen. Won't bore you any more.

Remember a couple of years ago I wrote about Richard Meinertzhagen as a Halloween Hero of the Birding Revolution (now there's a series I need to resurrect when I get chance). Well this week, I have mostly been reading The Meinertzhagen Mystery by Brian Garfield, and it rather brutally proves the lie about most of the extraordinary claimed events in Meinertzhagen's life. He never bounced on Darwin's knee; he rewrote his diaries to include his 'predictions' that war with Germany was inevitable; he never shot a German Duke then ate his Christmas dinner; he was never a real spy, and he hung around at the back of the battles he was meant to have participated in; he never crash-landed a plane after the pilot collapsed; he didn't drop the haversack behind Turkish lines (someone else did), and the Haversack Ruse didn't work anyway; he never rescued a Russian princess; he never fought for the Zionists against the Arabs in Haifa; he was never in a secret dual with a mystery spy; he never slaughtered a cell of Spanish Bolsheviks; he never met Hitler and/or had the opportunity to kill him. His wife did still die in strange circumstance, however (she apparently shot herself in the head while Dickie was standing behind her with a loaded revolver, shortly after she realised about his bird thefts). When you take away all the documentary evidence about the notable (non-birdy) events in Dickie's life that were not directly or indirectly derived from Meinertzhagen's own writing or influence, there is nothing left except an incompetent middle-level officer and troublesome low-level military intelligence worker who was gently pushed out of the army and into the harmless pursuit of collecting birds. The good work that he did (he was good at drawing maps in his military career, and was an outstanding traveller and collector in his ornithological career) was overshadowed and indeed blown away, in the end, by the unnecessary lies, thefts and deceit, and fantasy world he created around himself.

Wishing Chair, take me to a place where I can get a patch tick. But the mischievous Wishing Chair first took me round on a tour of the local Blue Tits, Common Chaffinches etc. Only 5 Eurasian Reed Buntings in the wet stubble - I needed a huge f***off Labradoodle to help me on that one. Several months after the trauma previously of trying to photograph a Bluethroat using Diane's camera, I finally dared to try once more, and got this cracking shot of one of the Reed Buntings. Clearly I haven't got the hang of the AF still. 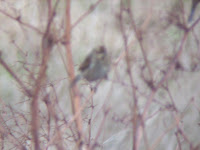 Down at the beach, there were 8 yellow-billed male Common Eiders with their best girls, but still my focus was all over the place. 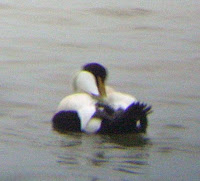 6 Common Scoters flew south in the distance, and this persuaded me to try a short seawatch, which was dull dull dull with only a few auks going north.

The Magical Wishing Chair took me up to Cran Hill, and as I flew alongside a formation of 5 (count 'em) Pink-footed Geese, I spotted a Common Raven circling in the air. Mmmmmm... for N Scotland you would assume that this one would be a fairly regular visitor, and difficult to overlook, but this is a Patch Tick. First of the year. First of several hopefully. Mind, Cran Hill does look suitable for foraging Ravens. I think it's the pile of dead Vikings that would attract them.
Posted by Martin at 9:45 PM 2 comments:

Sooooo... cold. brrrrr.....Like the wrath of God has descended upon Gotham. I descended into the wrong comic. I'm not a bitter man, but if Santa doesn't hate me, why did he bring Meccano for Peter (grrr.....) and a keyboard for Lizzie? All I wanted for Christmas was a Marsh Tit. But Santa just left me a lump of Coal Tits. In the garden at East Cammachmore - all the other birds the owners had told me were there, were there. Great Spotted Woodpecker, Eurasian Sparrowhawk, plenty other tits, and an influx of Fieldfares. With the mildly amusing addition of a pair of Common Treecreepers on the peanuts. Nothing more interesting, but I resolved to give it one more try on Wednesday.

Egad! It's even more boring than before! The same birds as before, minus any woodpeckers but plus a Goldcrest. hmmm... y'know, I think it's most likely there was aCommon Blackcap inthe garden at some point, and they have confused the features with a Coal Tit, in the way that non-birders do.

Between us, me and someone else's abomination of a labradoodle (ffs!) flushed 18 Eurasian Reed Buntings from the wet stubble by St Anne's.