I find a better class of dead thing out here. 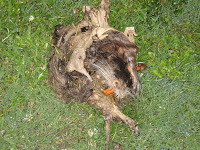 I booked myself a trip on a boat up Honey Island Swamp 0n the West Pearl River. It was a blast... Loggerhead Shrike on telephone wires at the roadside on the way there, then an Eastern Bluebird being spectacular in the driveway at the Cajun Encounters HQ.

Onto the boat, which looked suspiciously like a troop carrier, piloted by a veteran of Iraq War 1. The tour wasn't really aimed at birding - mostly looking for Alligators, like these ones. I got piles of this. 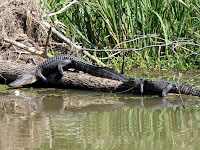 But there were some birds too. A Swallow-tailed Kite soared over the trees on the river. Captain Gerry offered the following wisdom: 'That's a Split-tailed Kite. They're also sometimes called the Mississippi Kite... they fly down the Mississippi here to breed, and then fly right back again.' When a real Mississippi Kite flew over, he offered 'I don't know what that is. Some sort of hawk.' An Anhinga went over and he spoke with authority 'That's a cormorant'.

Plenty of birds to be seen, although I missed some of the smaller ones on account of being on a moving boat. But some alligator-munching Great Egrets, and nice views of Great Blue Herons, and several Little Blue Herons. 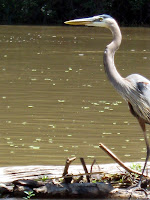 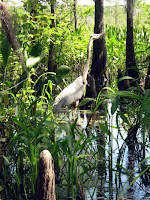 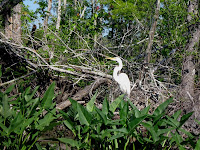 We were genuinely in the Cypress Swamp. It was like all those photos of where people look for Ivorybills. 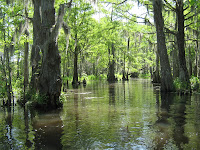 A couple of Red-headed Woodpeckers flashing their white secondaries, although I didn't see any Ivorybills, somehow, but blimey, I'm willing to bet some big bastard woodpecker made these suggestive holes. 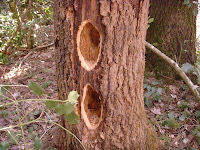 Alongside the river in a real Cajun village of houses on stilts that walk around spookily, there were 10s of Purple Martins checking out their Martin-boxes, and lots of Barn Swallows hanging around the vertical lift bridge.

In the air... a few Turkey Vultures and a whirling circle of 5 American Black Vultures. Three Ospreys in a tree together on the roadside as we drove home, and a Killdeer on the interesting side of the NASA rocket-assembly plant. Another Ka-chow morning.

In my crappy hotel room with no window I had to guess when it might be getting light, phoned a cab and got to the City Park in the dark and pissing rain. I stood in the shelter of some bushes for 30 minutes, watching some scary lightning flashes split the sky and trying not to catch the eye of the local loonies. Cheered myself up by wondering if this weather would bring some migrating warblers down. Eventually it got light, and game on, with the roosting Laughing Gulls taking off, and a large lake next to the Museum of Art holding Black-crowned and Yellow-crowned Night Herons, Great and Snowy Egrets, Great Blue Heron, Double-crested Cormorant and Brown Pelican, Canada Goose, and a flock of Black-bellied Whistling Ducks flying around. 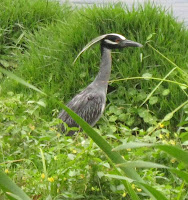 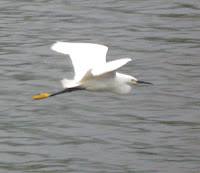 With no gen whatsoever, I had to start wandering round at random and hoping to bump into birds. This happened! Recorded 5 Least Terns fishing and calling in the ponds, then collected some Green Herons, Cattle Egrets and 4 White Ibises - those last ones the first ones I've seen on the ground(!). Some Common Grackles, Blue Jays, Northern Mockingbirds and Eastern Kingbirds around, and then a surprise... proper birding... a Solitary Sandpiper feeding in the mud at lake edge.

Followingthe Solitary sandpiper round lead me into a little copse, and it turned out the canopy was alive. With birds, even. A Yellow Warbler, 2 Baltimore Orioles, Summer Tanagers and a male Scarlet Tanager, Red-eyed Vireo and Carolina Chickadees, a stonking Chestnut-sided Warbler, Red-headed Woodpecker and a female Hooded Warbler. 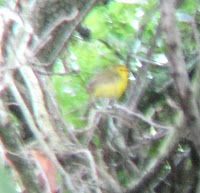 After this, I stopped trying digibinning in poor light. Female Hooded Warbler.
And I also bumped into another couple of birders whi gave me directions to the 'best part' - Couturie Forest, further up the park. OK, I'll head there, but it was quite a walk and as I headed up the water's edge in the right general direction, I got a male Myrtle Warbler, Downy Woodpecker, Northern (yes Northern) Waterthrush, a male Common Yellowthroat and a male Hooded Warbler. Under the road, still following the trees, and things kept coming - American Robin (my first of the trip), Ruby-crowned Kinglet, 2 Yellow-throated Warblers (phwoargh!) and a female American Redstart - the joy at this one tempered only by the fact it wasn't a male. A tainted tick!

Barn Swallows over the open ground and some Tree Swallows buzzing round like House Martins on steroids. There was an Osprey perched high in a dead tree by some new lake I found, and an Alligator in the water. I resolved to be more careful near the water.

Moving on, a Blue Grosbeak doing bugger all at the top of a tree, and then a Great-crested Flycatcher - wow! What a whopper. Another whopper, a Turkey Vulture overhead.

I stumbled into Couturie Forest, and again started wandering around at random - seeing nothing to start with, but then cheered up by a male Rose-breasted Grosbeak visible from the platform at the top of the hill. Then down the other side - and bumped into the 2 birders I met earlier - they showed me a Kentucky Warbler. Nice. Then wandering around a bit more, there was another birder there too, and saw a day-glo Prairie Warbler, Tenessee Warbler, 2 Blue-winged Warblers, Gray Catbird, White-eyed Vireo, and a Cardinal. I was getting quite pleased with my haul by now. Out of the wood, and a flock of 8 Indigo Buntings flushed with ease :-$ and a Red-shouldered Hawk overhead. 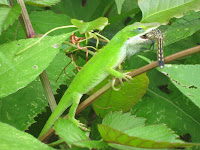 As it warmed up, these lizards came out to eat these dragonflies.
It was now 6 hours since I was dumped inthe rain, and though the weather had cheered up I was starting to think I should maybe turn round and start heading back. But the birds conspired against me - another small copse surrounding the sort of ruined toliet block where bums like to hang out attracted my attention by flashing another Hooded Warbler at me, and then when I went in, found some more Carolina Chickadees, Yellow Warblers, 3 Blue-winged Warblers, 2 Tenessee Warblers and a flock (flock!) of 5 Myrtle Warblers. A movement up in the canopy turned out to be a Black-throated Green Warbler, and another movement turned into a CERULEAN WARBLER - surely the best warbler there is. Except then my tainted tick came back for untainting - a male American Redstart hoved into view, and I knew the world had gone nuts when I was getting irritated by the Myrtle Warbler getting in the way of a clear view of it. There was a House Wren in here too. It really was time to start the long walk back downtown, so I did, though a Cooper's Hawk attached itself to my trip list before I got to the bar, and I flushed a Killdeer as I tried to find a way under the Interstate.

If we can have the Whistling Ducks, can we have the Muscovies too?

Fantastic day's birding.
Posted by Martin at 12:42 AM 2 comments:

All photos today sponsored by the failed digi-bnning company of Skegness.

I'm in . Told you I would be. With a few hours before my meeting started, I made a spur-of-the-moment decision to hop onto the no. 11 bus and head over to the . Frankly first impressions were not promising. When I got off the bus, all I could see was a packed zoo car park, and a golf course with 1000s (no exaggeration) of joggers going round and around and around. And no birds. In fact I thought I was going to see bugger all here. With no gen except that there was a heronry somewhere, I set off in hope, heading north along the west end of the golf course, picking up a couple of Common Grackles, American Crows and a fly-by Snowy Egret. heheh, so there might be a heronry around. At a pond on the golf course, I saw an American Crow amusingly push a turtle back into the water.

Got to the north end and things started to get better, with 2 female Wood Ducks sleeping on an overhanging branch, and 2 Common Moorhens (i.e. ‘Laughing Moorhens’) on the water – ready to split them now :-) Some Mallards too.

An Anhinga was perched

I wandered round and facing me was this… It wouldn’t turn round to let me see its back, so I was a bit stuck on this one (and this overexposed shot probably won’t help), but after careful consideration… it seems to be a Red-shouldered Hawk, actually very like one of the pale Florida ones.

Some male Wood Ducks here too – I accept it onto Category A of my list – and a Green Heron bugging a turtle. Decided it couldn’t hurt to follow this lake round the north and east end. 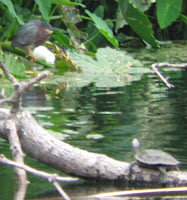 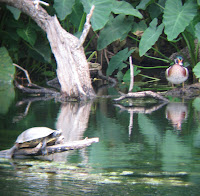 The little wooded copse by the bridge at the north end turned out to be top notch, being a little bit off the track. Four or five Red-eyed Vireos were high in the trees, and a pair of Summer Tanagers (a tick!), a couple of Blue Jays, a Downy Woodpecker and a Brown Thrasher. Some Common Starlings over on the greens of the golf course, and an Eastern Kingbird. A strange warbling song from the low branches and ka-chow!! A White-eyed Vireo (another tick) and ka-chow-squared! A male Bay-breasted Warbler looking, frankly, gorgeous. I was surprised to find a White-throated Sparrow (this is like birding in ) and then a good looking small dumpy flycatcher with a bold eye ring that must have been Least Flycatcher. Unfortunately it flew off.

And then, I bumped into the heronry – turned out it was difficult to miss. Bit of a racket, and it was full. Many Cattle Egrets and Great Egrets, smaller numbers of Snowy Egrets and Black-crowned Night Herons, and a few pairs of (ka-chow again) Tricolored Herons. Sleeping on the island was a (presumably plastic) Black-bellied Whistling Duck: its case wasn’t helped by the motley collection of Muscovy Ducks kicking about. 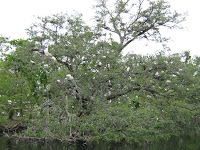 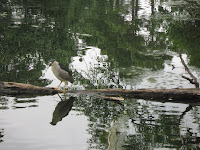 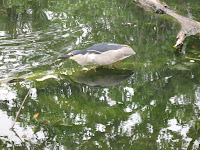 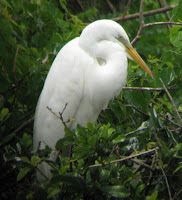 Had to be getting back… time to do some work, so I walked the 5 miles back to the hotel(!) listening to Chimney Swifts and Northern Mockingbirds, and seeing plenty of House Sparrows, Mourning Doves and a single Collared Dove – they really do get everywhere.

Migrants... some in, some out.

Just this very second setting off for Edinburgh. Anyway... a few pitiful sightings - some birds in, some out.

Wednesday 1st April
A Eurasian Woodcock flying over my head (better than under it) in Cornhill Rd, Aberdeen.

If all goes to plan, my next reports will be from New Orleans :-O
Posted by Martin at 9:51 AM No comments: