Hi everyone. It's me. At least, I think it's me. Maybe if I hang around here for a month I might be retrospectively identified from photos. I'm moulting my underwing coverts. It's OK, you can still tick me.

So, I'm another species that was moving through Beijing when Martin was there that was vagrant in the UK at the same time.

But I'm getting ahead of myself.

Thursday 16th October
The day I was heading off from my holiday among the Yorkshiremen... y'know, they're like Geordies but without the brains. Martin was off work and went round Newtonhill, which was hoaching with newly arrived Goldcrests (30+) and also Coal Tits (many), both of which are signs that it's time to start looking for Pallas's Leaf Warblers. The promise of goldcrest-peeping bushes wasn't backed up with hoards of other migrants, though a Common Chiffchaff at the top of the track from St Annes counts.

Friday 17th October.
Saw the first sizable push of Redwings heading inland at dawn. And a fresh horde of Goldcrests.

The theme was continued on...
Saturday 18th October
when I was surprised to find, while I was breakfasting on dragonflies in Martin's kitchen - a tired and greasy room that need the McKinney touch, that Martin had gone out for a run. I hope he catches a cold. When Martin got back he was trying to explain breathlessly to me what he had seen in the early morning chill. And as they took him away in the ambulance he finally explained - he'd heard a small flock of Long-tailed Tits in the bushes by the A90 (less than annual in Newtonhill), and also a couple of Redpoll sp in willows at Cran Hill.

Later, Martin had a total field* day, photographing things even I wouldn't eat. I was going to say a field mouse day with my witty communist-bloc humour, until Martin pointed out they were wood mice. He wood!! Heh heh heh. Sometimes I crack myself up. Ooops, I laughed so hard I just moulted a bit. 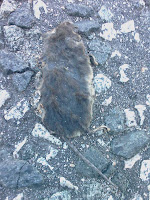 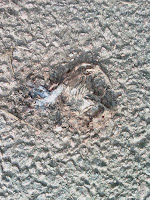 Sunday 19th October
was my last day as Martin's guest, and frankly I'm glad. Those kids of his... I'd rather die in mysterious circumstances in Dumfries and Galloway and then be forgotten about and left in the loft. That's what happened to my great grandfather. At least, I think so. I was doing one of those 'trace my family' tv programmes, hence the trip to Yorkshire, and also I mistook Tophill for Thornhill, where grandpa died. That's why I hung around so long, waiting for Google Maps to open. I thought I wasn't going to be able to fly today though - one of those days that never quite gets light, and Martin was wandering around in the gloom and the wind with very little prospect of seeing anything. Still plenty of Goldcrests and Coal Tits everywhere, White-throated Dipper on the burn and Peregrine Falcon (I'm a bit scared of those) over Cran Hill. Offshore, Martin saw an adult and a juvvy Red-throated Diver just off the breakers, and a herring-gull-dwarfing adult Great Northern Diver (Common Loon) with them. Another sp that is less than annual here, apparently a cause of some satisfaction to Martin, the saddo.

As he was looking at that, a Merlin flew south, harrassed briefly by a Common Gull. Not scared of either of them. It all added to the wintery feel. Also offshore, a Great Skua, but little else. A tour of the village garden while I was waiting for my taxi to the airport produced the obligatory Common Chiffchaff for Martin, which surprised him by bursting into a few seconds of song!! I have that effect on all the girls!! Ha hah hahhh!!! Then Martin suggested it was probably a boy. How I hate him.

Even the allotments had nothing but Goldcrests, Dunnocks, Common Chaffinches and European Robins. Look at the place... Allotments, with sea beyond and next stop Denmark. It really should have more migrants.

Anyway, that's all from me. How you English say... byeeeeeee!!!!!! Martin is on the toilet with an attack of explosive diarrhoea. How surprised and delighted he will be when he sees I have written his wonderful blog for him. And much better than he ever could.
Posted by Martin at 10:55 PM

Dear Master Amur (I won't call you 'Mister' until you at least gain a full set of adult type underwing coverts on both wings),
I hope you enjoyed your stay among those canny Yorkshiremen, and didn't harass any whippets or mistake a piece of black pudding for an Emperor sp? I also hope that you still have that piece of paper that I gave you this spring on Happy Island, with detailed directions to Co. Cork, and that you have the good sense to turn up somewhere likely to be covered, so that you won't lack for a welcoming committee.
The Irish Tourist Board would also be quite pleased if you decide to pop over and meet up with me again, as you may have heard of a group of people called 'passport birders'? These hardy souls would think nothing of hopping on a plane and coming over to make your acquaintance, and any local hostelries and boozers would be more than delighted to meet them also...
Still, whatever you do, don't crash to the ground, or the tabloids will get out the 'Amur To Fall' headlines.
Your good friend,
that Irish bollix who was on Happy Island this May

Dear Master Amur, sorry for the initial confusion when we met - I am but a poor and stupid Yorkshireman and you and your cousin Master Red-foot do so look alike. Thank you for being my guest for such a long period however my gratitude is only tempered by your reticience in disclosing your true identity but then which 'celeb' doesn't? Your gratefully your landlord.

Dear Master Amur,
Despite your rather derogatory comments about the natives of this good county I have no doubt that you would be welcomed back with joy and celebrations if you were to return. May I suggest a secret location, which I will send you by text or email, but it's in the area of Saltwick Nab, on a Saturday or Sunday in May, we could arrange the actual date and time for your convenience. Just email me your contact details when you are next on-line. I assure you there will be no mess ups with your true identity next time. (I really wouldn't go to Scilly instead though, they'll probably call you Mr Sooty and then there'll be a terrible hullabaloo.) Until we meet, my best regards etc